Pastor Scott Ardary was born on December 11th ,1972 in Cleveland, Ohio. He  spent much of his early years in foster homes in Pennsylvania after his biological father, who was an alcoholic, left him in a bar.  When he was nine years old he returned home to live with his mother in Cleveland, Ohio, where they remained until moving to Orwell, Ohio in 1983.  He attended both Grand Valley and Pymatuning Valley Schools and after turning eighteen in 1991, he moved back to Cleveland where he began attending the Parma Pentecostal Church.  Having repented and committed his life to Jesus, he was baptized in Jesus’ name and filled with the Baptism of the Holy Ghost in 1991.  From that point, he began to grow in the Lord as he submitted to his pastor, Dan Deaton.

Pastor Ardary began working in youth ministry in 1994 and continued to do so until 1999 when he then assumed oversight of the church’s outreach ministry.  Filled with a burden to teach people the gospel and the revelation of John 3:3-5 & Acts 2:38, he and his pastor began holding Bible studies at the Orwell Fire Hall in 2002. From those Bible studies a church was birthed which now inhabits the Peck Road facility that was built and completed in 2009.  The church has grown to approximately 175 members and has had a peak attendance of 210 in these short years.  Pastor Ardary focuses primarily on the personal growth of each individual member as the Bible teaches us to “go and make disciples.”  In 2017 the church completed multiple additions beginning with the Michael Theodore Jr. pavilion, the Simpson Fellowship Hall, a new foyer and a paved parking lot.

Family
Pastor Ardary married his beloved wife, Laura, in 1998 and they have since given birth to 3 sons who are all active in the church! 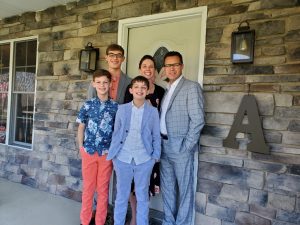 Interests
Pastor Ardary loves God first, his wife and three boys. He also loves working with people.  He enjoys golf and has been a Pittsburgh Steelers’ fan since he was a child.  He loves water sports and outdoor recreational with his boys!